Here's what this year's Starbucks holiday cups look like

New York (CNN Business)It's a time-honored tradition: November is upon us, and Starbucks has unveiled its a new cup design for the holiday season.

Beginning Friday, customers will have their drinks served in one of four new festive cups. The annual celebration is designed to drum up excitement for the coffee chain. Starbucks said this year's theme, "Carry the Merry," will be written on two of the cups.
"Our thought behind the cups this year was about people carrying them out in the world as messengers of joy," Jeff Wilkson, creative director for Starbucks, said in a press release. He added that he wants customers' orders to be a "brief moment that they can look forward to." 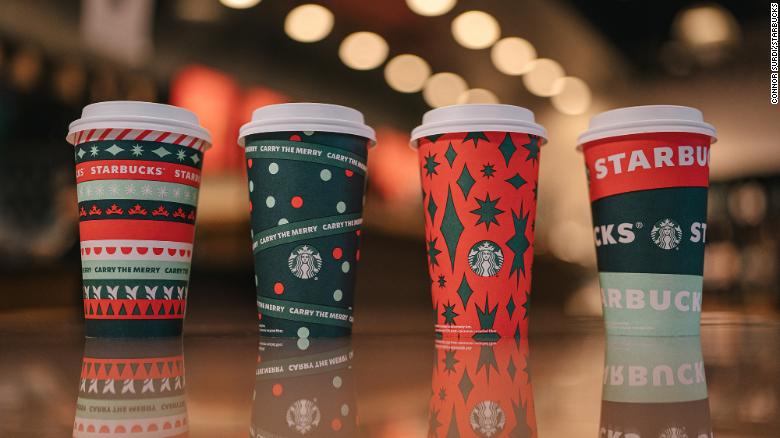 The holiday cups are back.
Starbucks (SBUX) is giving away a free reusable version of the holiday cup on Friday to customers who order a seasonal drink at its US restaurants or through delivery. Baristas will also begin wearing red aprons.
This year's seasonal drinks include peppermint mocha, toasted white chocolate mocha, caramel brulee latte, chestnut praline latte and eggnog latte in addition to its Christmas blend coffee. It will also offer a number of seasonal foods, including a new cranberry orange scone, sugar plum cheese danish and a snowman cookie and cake pop.
New or seasonal menu items help drive sales because customers often buy them in addition to their regular orders instead of swapping items out. This year, Starbucks said the Pumpkin Cream Cold Brew, which launched in 2019, outsold its signature Pumpkin Spice Latte in the third quarter.
Starbucks first rolled out seasonal cups in 1997. The company stirred up controversy in 2015 when it removed "symbols of the season," i.e. reindeer and ornaments, and went with a simple two-toned red cup. Since then, it has added more festive flourishes, such as ornaments and mistletoe, to its cups.
Meanwhile, Dunkin' (DNKN) rolled out its own holiday menu, cup and packaging Wednesday. New this year is a sourdough breakfast sandwich and a chai latte with oatmilk, its newest non-dairy option. 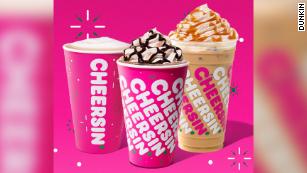 The cups at Dunkin'.

The chain has made up a word for its cups and boxes: Cheersin', which it describes as a "playful combination of cheers and Dunkin', symbolizing coming together in both celebration and appreciation."
Last week, Dunkin' announced it was going private in a $11.3 billion deal with Inspire Brands.